Team 971 was founded in 2002 by a group of interested Seniors who approached the science and technology teacher. During this game, Zone Zeal, 971 had a robot that seeded 16th at the Silicon Valley Regional and was a NASA grant team.  In the 2003 game, Stack Attack, 971 seeded 28th at SVR and 8th at Sacramento, picking 951 and 1072 for its alliance partners.  The team went on to World Championships and seeded 67th in the Curie division.  This group lead the team for two years after the founding, until the Tech Teacher decided that he did not have enough time and the founding members graduated.

In 2004, the team was taken over by the AP Physics teacher and a Junior who was a freshman on the original team along with an enthusiastic group of rookie students. This group led the team to a regional victory at the 2004 Silicon Valley Regional with 254 and 852, and a trip to the 2004 Nationals. This group continued with a strong showing at the 2005 Silicon Valley Regional, seeding 27th.  971's robot, Spartacus, was the only team with camera tracking at Silicon Valley in 2005. The next year, the Physics teacher decided because of his move, he would not have enough time for the team, so the slack was picked up by a dedicated math teacher and a strong student leadership. In 2006, the team tried an ambitious strategy that resulted in a lot of learning, but did not work as well as expected. None the less, the team still decided to go to Championships. That year, the team also connected with Berger Manufacturing, which allowed them to manufacture an intricate hopper design. In 2008, most of the previous year’s team, which consisted of seniors, had graduated. The remaining members of the team successfully recruited many freshmen and sophomores to be a part of this amazing experience. All of the new team members were shown all aspects of the competition and what jobs had to be filled. After each team member selected the field that they were interested in, the more experience members trained the newcomers in everything related to that field so that they would be ready with knowledge to build the robot. With a team of excited rookies, the team went all the way to the quarterfinals at the 2008 Silicon Valley Regional.

The robot reeled in a large fiberglass hoop to grab that large game piece ball, with a fabric top part to align the hoop below the ball's equator. It was very clever but a lesson learned was that floppy mechanisms tend to be slow, hard to control, and an entanglement risk. After a huge recruiting effort, the team, composed of many excited freshman, was ready to learn from the existing members. The new team members learned and explored different aspects of robotics through pre-season projects and training sessions. All of the team’s knowledge was put to the test during build season, resulting in a robot that went, with the help of Teams 254 and 852, undefeated at the 2009 Silicon Valley Regional. At the 2009 FIRST Championship, the team joined 111 and 67’s alliance in Galileo and went undefeated through the rest of its matches all the way to a World Champion title.

Notes: Balls got stuck in hopper, so an added roller helped but did not eliminate ball problems; Traction control was used on the slick surface; extra flanges needed in sheetmetal near bottom roller: it broke at Calgames during a colision. With the legacy of last year, the team was ready to try to duplicate their success. A new, complicated game required hard decisions about priorities, and the team expanded its training on new members. At the 2010 Silicon Valley Regional, the team went all the way to finals, winning the event for the second year in a row, with alliance Teams 254 and 649. They then went on to the 2010 World Championships, achieving Quarter Finals in our Division with Teams 525 and 2137. After the season, the team continued its success by winning the 2010 WRRF CalGames.

Notes: Low center of gravity; sheet metal drivetrain 1/8 inch was heavy, had cutouts to help it go over bump.  Thermisters on the CIM drive train were useful; Motors got very hot when driven for a long time, fans help to cool them down tremendously; packing tape on rollers worked well during CalGames, had polurethane rollers for SVR and World Championship; chain tensioning system was time consuming and not effective. Notes: high center of gravity (unstable) when wrist was all the way up. hard to change tread on wheels, some troubles with tensioners on the timing belt for the elevator. It was a 6 wheel tank drive, center wheel dropped, and had a quick tensioning system for the drivetrain. 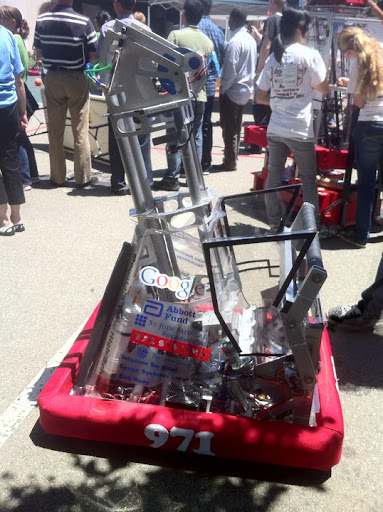 This was the first year which the team went through without having a teacher dedicated to the team (a couple teachers let us use their classrooms, but they didn't supervise or anything), we were able to get the school to authorize several team mentors and parents as supervisors. Also, at the end of the 2012 season going into the 2013 season, the team overwent a change in leadership structure to reflect the growing size of the team. 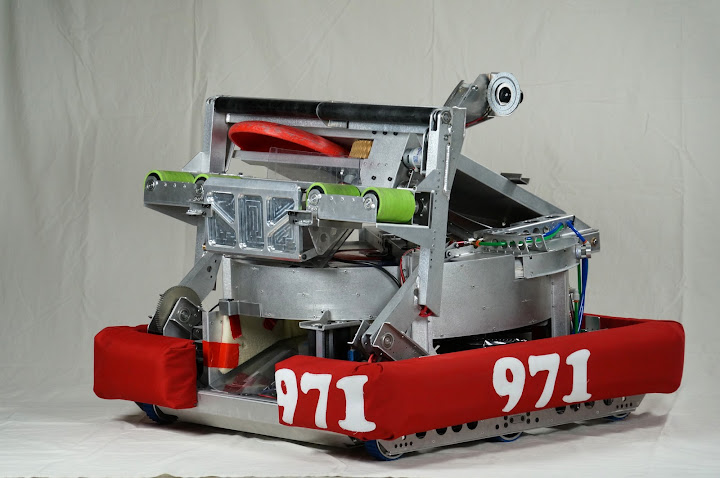 In 2013, our main sheet metal manufacturing sponsor, Berger Manufacturing, went out of business over the summer before the 2012 - 2013 school year. A subgroup of dedicated students and mentors went through the process of contacting and communicating with many different local manufacturing businesses. They were able to find several machining companies generous enough to sponsor us.

First year as number one seed in our division at Champs.  First year to receive an award at champs.

First year that the team won a Chairman’s Award.